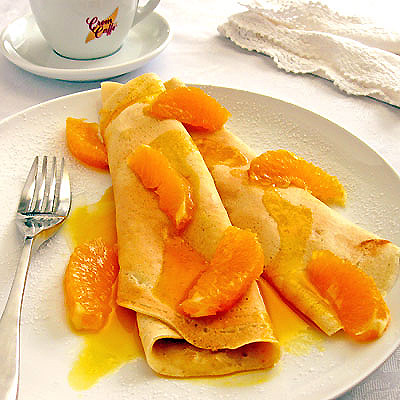 Do you have room for a little dessert? I know you’ve had 6 pancakes in a row here at Sippity Sup. Maybe something sweet is in order. How about crêpes? Better yet, Crêpes Suzette.

Alright, since you asked so nicely! But first how about a little histoire?

A crêpe is a thin pancake. The common ingredients include flour, eggs, milk, butter and a pinch of salt, and (according to Martha Stewart) sometimes beer. Crêpes are usually of two types: crêpes sucres made with wheat flour and served with a sweet filling and crêpes sales which are usually made with buckwheat flour and filled with savory ingredients such as chicken, eggs, cheese, vegetables or perhaps fruits de mer (seafood).

The type of filling used in either sweet or savory crêpes is limited only by your imagination and willingness to experiment.

When pronouncing a French word in the singular with an S after a vowel the S is silent. So through the generations, the S was dropped from the singular form of this word, since they weren’t using it anyway.

Crêpes may be rolled or folded. Crêpes sales can be eaten at any meal. Crêpes sucres usually are served as a dessert. They can be filled with various other sweet items: jam, melted chocolate, dairy, ice cream, berries, nuts, cinnamon etc. Popular sweet toppings include sugar (granulated or powdered), sugar and lemon juice, whipped cream, fruit spreads, sliced soft fruits, etc. A typical dessert crêpe is the Crêpes Suzette, a crêpe with lightly grated orange peel and liqueur (usually Grand Marnier), which is subsequently lit.

And guess what? That is exactly what my 6th day of international pancakes holds for you. Crêpes Suzette! Which was one of Julia Child’s favorite recipes. The version I present here is an amalgamation of Julia’s recipe and a Bobby Flay recipe with an added flourish from me. I simplified the recipe by changing Julia’s orange butter filling to a pre-prepared orange marmalade, and I skipped Bobby’s instruction of soaking the crêpes in the sauce before rolling it.

Now on to the history, which I warn you is most probably false. The accepted story, however, has a young assistant waiter bungling the dessert while preparing crÃªpes tableside for a Prince and his lovely female companion.

The story rings false because it’s hard to imagine a well-known restaurant of the highest caliber allowing a 14 y.o. assistant to serve the Prince of Wales.

But according to that assistant, Henri Charpentier, that’s exactly what happened on the night he “invented” this famous dish. Here is an excerpt, in own words from his autobiography Life a la Henri– Being The Memories of Henri Charpentier.

“It was quite by accident as I worked in front of a chafing dish that the cordials caught fire. I thought I was ruined. The Prince and his friends were waiting. How could I begin all over? I tasted it. It was, I thought, the most delicious melody of sweet flavors I had ever tasted. I still think so. That accident of the flame was precisely what was needed to bring all those various instruments into one harmony of taste … He ate the pancakes with a fork, but he used a spoon to capture the remaining syrup. He asked me the name of that which he had eaten with so much relish. I told him it was to be called CrêpesPrincesse.

He recognized that the pancake controlled the gender and that this was a compliment designed for him, but he protested with a mock ferocity that there was a lady present. She was alert and rose to her feet and holding her little shirt wide with her hands she made him a curtsey. ‘Will you,’ said His Majesty, ‘change Crêpes Princesse to Crêpes Suzette’ Thus was born and baptized this confection, one taste of which, I really believe, would reform a cannibal into a civilized gentleman. The next day I received a present from the Prince, a jeweled ring, a Panama hat and a cane.”

Whisk together the flour and salt in a medium bowl, set aside. Whisk together the eggs and sugar in a large bowl until pale. Whisk in 1 1/2 cups of the milk, 1 T orange liqueur, vanilla, and orange zest and flour until combined. If the mixture is too thick, add the remaining milk until a thin consistency is achieved. Cover and refrigerate the batter for 30 minutes.

Heat an 8‑inch crêpes pan or skillet over medium heat for about 1 minute. Cover the surface of the pan with clarified butter until it gets sizzling hot. Ladle some batter onto the middle of the crepe pan and immediately start swirling the pan to distribute the batter over the surface. Cook for 45 to 60 seconds or until lightly golden brown. Flip over and cook the other side for 20 seconds. Remove to a plate and repeat with the remaining batter.

In a large skillet over high heat, bring the orange juice to a boil. Add the sugar and zest, reduce the heat to a simmer, and cook until the sugar has melted and the mixture is slightly reduced about 5 minutes. Remove from heat and add the remaining orange liqueur and orange sections. Set aside.

Working in batches spoon about 1 tablespoon of marmalade onto the center of 1 crêpe, spreading it around to cover nearly the whole surface. Roll the crêpe into a cylinder and transfer it to a large warm serving platter. Repeat with remaining crêpes. Spoon on some of the orange sections and a good drizzle of the sauce.

This dish is often served flaming (flambe). To ignite (safely) sprinkle a bit of sugar over the crêpes, sauce and orange slices. Pour about 1/2 cup of cognac over the top of the crêpes, and then pour another 1/4 cup into a heatproof ladle. Using a match to light the surface of the cognac in the ladle and drizzle it onto the crêpe platter, igniting it as well. Never pour directly from the bottle, as it can be dangerous. Spoon the flaming liquid over and around the crêpes until the flame subsides. Serve 2 crêpes per person with the optional ice cream on the side and serve immediately. 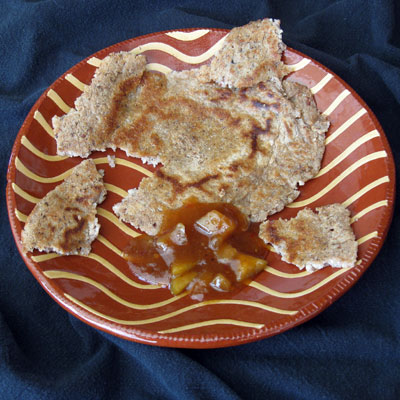 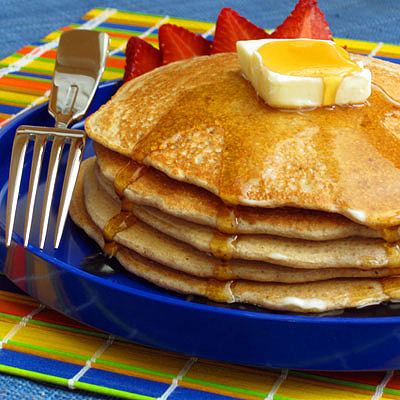