How To Remodel A Kitchen in 905 Days 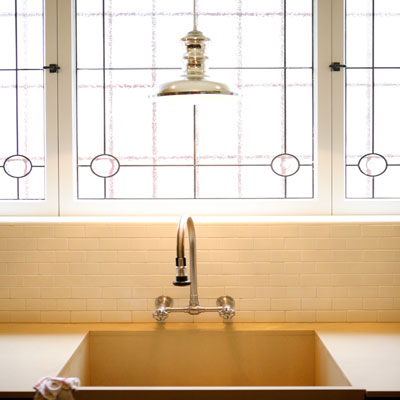 To be fair, the kitchen has been “done” for about 7 months. In fact I started this blog right about the time the kitchen was “done”.

But now the kitchen is done “done”. The last painful details (including a crack in a custom built sink) were finally completed about 3 weeks ago. So I have decided to document this kitchen. And where do I document everything in my life? Well here of course!

I won’t go into all the gory details. But basically we knocked out walls and turned a kitchen, a laundry room and my old office into a large kitchen and eating area. We moved the laundry room to what was formerly a spooky little space under the garage. We blasted through the foundation of the house to make a door that attaches the new laundry room to the kitchen.

In the process our architects Victoria Yust and Ian McIlvain (Tierra Sol y Mar)  had to invent some sort of iron truss that would support the second story yet not conflict with the rather dramatic ceiling details. Naturally we just had to move several load bearing walls, only to find that load was being carried by an area of the kitchen that (who knew??) was once an outside breezeway. So it had no foundation, and could not in any way be expected to hold up the second story of the house. So we had to put in a very expensive new foundation to the entire east expanse of the house. It is a fairly big house and it was a pretty big expanse. Ouch!

There were other “unforeseen” problems too. How come contractors can’t foresee these things? But we tackled them all like troopers, all the while cooking in the den and doing dishes in the bathtub.

Of course I love the kitchen, and all the painful details of the process seem to have nearly melted away. 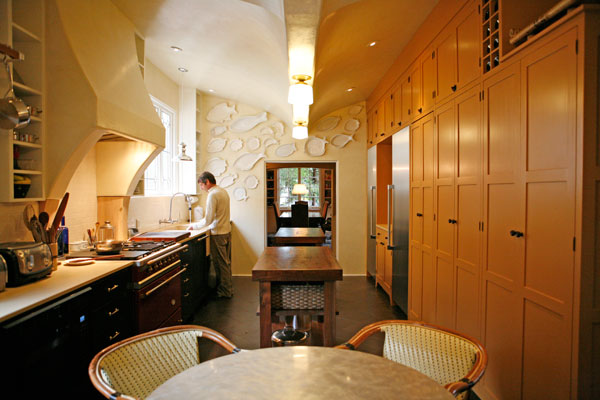 The biggest design challenge was doing a modern kitchen for someone who cooks as much as I do. While still making it look and feel like it belonged in an 83 year old Italian-style house in Hollywood. But I didn’t want an “old-fashioned” styled kitchen either. It needed to walk the line between historically appropriate and modern. Plus I needed it to be big and open and easy to clean. I wanted to avoid too much trendy stainless steel, but have enough touches of it to keep the space feeling stylish. I refused to do marble because I use this kitchen and I use it hard. But I hate granite. The answer was an Italian quartz product called Okite because it was available in a natural color with a honed finish. 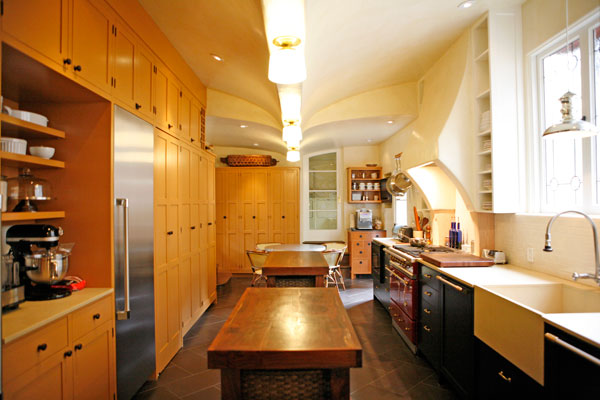 This is the view looking north from the alcove between the dining room and the kitchen. This alcove acts as a buffer between this part of the house and the living room. It was probably a butler’s pantry at one time, but our butler doesn’t need a pantry so we use it as a bar!

This is the way most people enter the kitchen for the very first time. So I wanted there to be a bit of “wow” when you walked in. Which was a difficult feat considering we are people with WAY more taste than money! Even though it may be hard to believe, we economized by using less expensive material in a ways that augmented the design rather than looked like a compromise. We used quartz instead of marble. We used porcelain instead of stone. There is very little tile, and what there is, is rather simple. The cabinets are all paint grade. But all these “money savers” look integral to the design in my opinion! 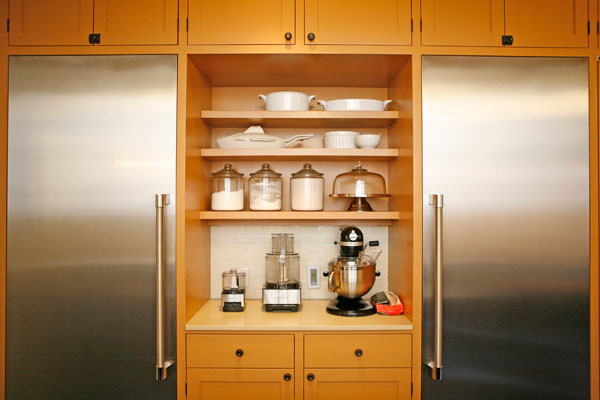 We did splurge on the appliances. I took advantage of the Thermador Freedom line of refrigerators greatest design feature. The fridge and freezer can be separated.They could even be in different rooms if that is what you wanted. Not only are they fabulously large, but the symmetry of two equal-sized units comfortably spaced, add a sense of calm I think. Kitchens can be hectic. We live and entertain in ours. So any bit of peace that can be designed into it is a good thing. 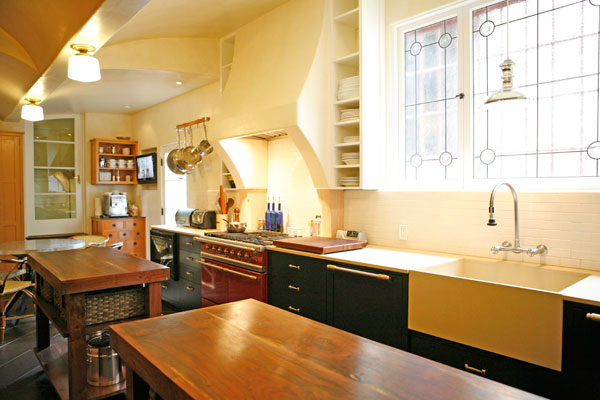 Another great angle on the kitchen shows you that I have more storage space than I have (yet) been able to use. It also shows the troublesome sink that is finally finished and working properly. The 2 dishwashers are integrated into the cabinetry and practically disappear. We choose black for the wet areas of the kitchen to hide greasy fingerprints and for ease of cleaning. Many people think we were crazy to do black. But it is one of the few things I knew I wanted going into the design process. Besides look how great my red Lacanche range looks against the black. 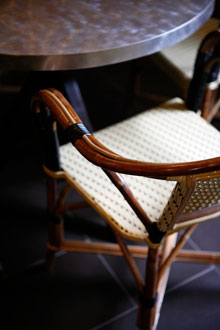 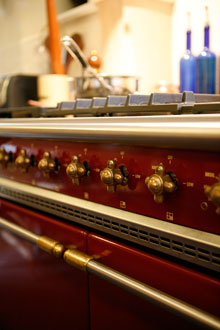 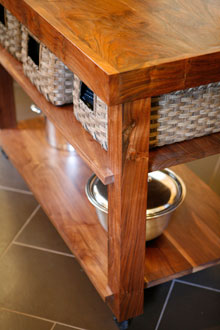 To me the success of this kitchen lies in the details. I love the traditional French cafe chairs paired with a modern interpretation of a zinc-topped table. The Lacanche is like a piece of art, and built to last 3 life-times. I get goosebumps when I look at it. It’s not big, or flashy, but to this cook it is the real deal! The work tables are on wheels. A feature I resisted, but now think is indespensible! They are made out of salvaged walnut and are finished with mineral oil only. I had them built this way so that I could chop food right on them, but they are so darn pretty I can’t bring myself to do it! 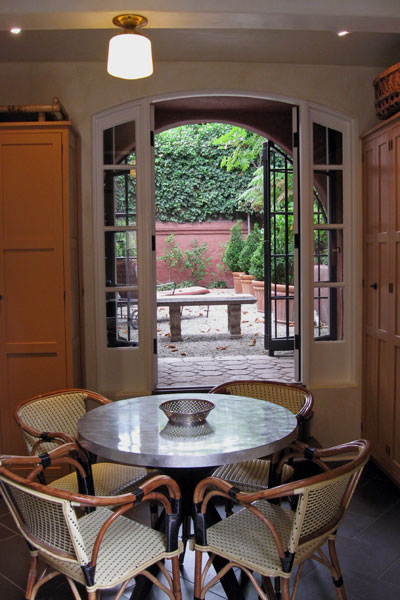 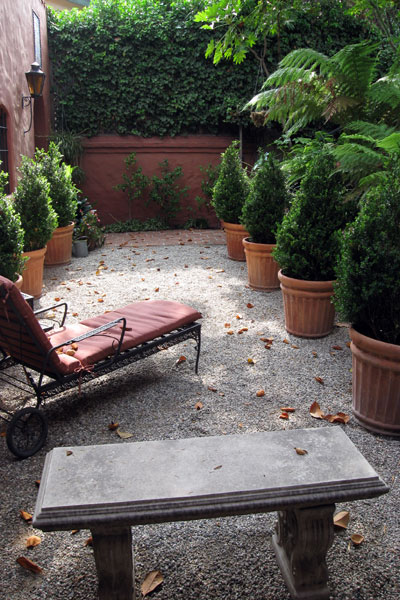 Which brings me to the last photos, and the whole reason we undertook such an aggressive remodel. This house is blessed with a courtyard that is completely private from the street and from the neighbors. In the old configuration it was difficult to get to, and it could only be viewed from a small window in my current office. The only people who used it were the dog, and the Fed-Ex guy when he wanted to leave packages in a safe place if we were away.

We added French doors to connect the eating area to the loggia and the courtyard beyond.

Now, not only do we have a lovely view from the kitchen. But it is just a few short steps to the new lounger in the courtyard where I often sit and listen to the birds (and the freeway, but heck it’s Los Angeles, we love our freeway!)