Holiday Catfish- Based On A True Story 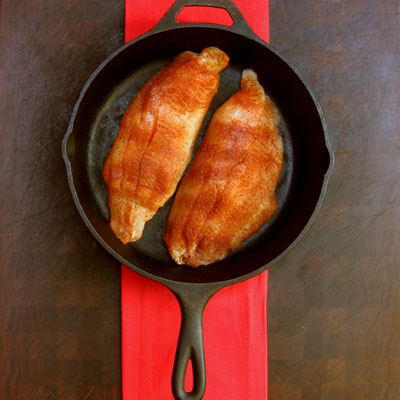 The holidays. They are here and they are starting right now. To many of us that means holiday cooking, baking and celebrating! But that’s not necessarily so with all of us.

Now I love cooking during the holidays. But I know for a fact not everyone does. And for those people who prefer not to cook during the holidays– I have catfish. Whenever I think about holiday foods (and not cooking) I always think of catfish! I am sure you do too. Right?

Hmmm… I can see quite a few of you wrinkling your brows in disbelief. Maybe you think Sup! sipped a little too much witches brew preparing for the advent of these holidays. Which may or may not be the case, but let me explain “anyhows”, as they say south of the M‑D line.

You may already realize that I spent a few years in the southern part of “these United States”. Southerners have wacky food traditions (and I mean that with the greatest respect!) It seems these traditions always get started by someone’s Great Aunt Delores and then somehow they get incorporated into the culinary lives of all kinds of unrelated folks. I mean think about that cake with the little plastic baby baked inside. And speaking of cake have you ever tried Coca-Cola cake? Now who do you think thought up those recipes? Why it was somebody’s Great Aunt Delores of course!

Which leads me to catfish. Because I had this girlfriend in college (yep girlfriend, don’t look so shocked). She was a local Tallahassee girl. She was always dragging me by her relative’s houses for meals. Her particularly favorite dining destination was her Great Aunt Delores’ house.

Now Aunt Delores was a character, and I sometimes had trouble abiding her; but man could she cook! She lived just over the border in Georgia. She had lived there her whole life and never once ventured an hour south to visit her mostly relocated family in Florida. She “didn’t see the point of that entire state”. I swear those were her words.

Well one time very near Halloween, Pam dragged me up there to have a meal. As was Pam’s way, we never called ahead. We always assumed Aunt Delores would be home watching her programs. Just waiting for people to show up so she could cook for them.

One afternoon we pulled up in my little Toyota, which was a car Pam’s Aunt hated, so she always made me park it “round back”. I guess so that the neighbors wouldn’t think she knew any “people like us”, you know people from Florida…

Anyway, it can still be hot in Georgia in October and I remember it was swelteringly hot. But, sure enough, there was Aunt Delores sitting on her porch watching her programs. She kept a TV on her front porch, never worrying that it might get stolen.

When she saw us coming she said, “Stop right there you kids. If I told you once I told you a million times, I don’t cook during the holidays”. Well she certainly never told me that once let alone a million times! So I tried to make an excuse to leave. But Pam was undaunted and just kept right on walking and plopped herself down on the sofa. Yes there was a sofa on the porch too.

Eventually I joined them and we watched her program. It was General Hospital during the peak of the Luke and Laura craze, so there was no talking allowed.

Once Luke and Laura had finished their cooing for the day. Aunt Delores stood up and said, “grab that skillet”– which even I knew was kept under the sofa.

That’s when she started her story. The one that begins with I don’t cook during the holidays and ends with catfish.

She opened the tale with the phrase: “Now I don“t expect you to know this, a fancy young man like yourself.” She used to call me “fancy young man” to my face not quite realizing (I don’t think…) that it was an insult. “But cooking during the holidays is a lot of work. When I was younger my mother refused to cook during the holidays, so the turkey and all the fixins fell on my young shoulders. I don’t believe I was but 8 years old.”

I saw Pam roll her eyes, but I was starting to like the direction this seemingly tall tale was going.

“And let me tell you, it takes a week– full on, for a child that small to get a meal like that on the table. Especially knowing how particular my daddy was about the cornbread stuffing.”

“You, fancy man, open up that freezer and pull out 6 or 8 of those catfish fillets and Pamela you pull down that box of spices and dust it off. We got royalty in the house and he’ll be wantin’ the good stuff.”

Before you know it Great Aunt Delores had flipped on the kitchen TV and lit another one of her skinny cigarettes, echoing forth the very phrase that was running through my mind, “Pop me a beer hon, it is hot as all get out in this kitchen!”

Well 2 or 3 beers later Aunt Delores had directed me through several simple steps. She started me out by melting a little butter mixed with oil in the skillet. She told me which spices to shake onto each side of those catfish fillets. Her choices were onion powder, celery salt and paprika, for the “fancy young man”. She taught me how to boil rice so that it wouldn’t stick together. Then instructed me to put butter into the rice, more butter and even more butter. “What do you think I am a poor woman? No sir, there’s plenty of butter in this house.”

So I plated that rice and then topped it with a couple of the golden pan-fried catfish fillets, then piled on a whole heap of chopped up pickled peppers.

I brought a plate over to Aunt Delores, finding myself hoping for some sort of approval from her. But no, Tom Brokaw was on so there was no talking allowed–“ save for “pop me one of them beers”.

Once dinner and Tom Brokaw were finished Aunt Delores stood up and began to clear the table. I jumped to my feet, as any fancy young man might do and I tried to help with the dishes.

“Nope” she snapped at me. I said I don’t cook during the holidays, but I never said a word about cleaning up. Don’t they teach English at that college of yours?”

Unrelated to this story, Pam and I broke up soon after. It was never meant to be as I was beginning to discover. I left Tallahassee, and moved to California just a few months later. I may have broken Pam’s heart just a little, but I needed to find my true self and I knew I could never do that in Florida.

In truth, I think Pam dodged a bullet though (well we both did), because she has been happily married for a very long time and is soon to be a Great Aunt herself!

But I did hear through the grapevine that Great Aunt Delores was a bit furious about my leave-taking. She took to telling perfect strangers that she had never really liked me and just knew there was something wrong with “a fancy young man like that letting an old lady boss him around in the kitchen”. Yet, I continued to get Christmas cards from her for many years to come. I heard she passed away in a nursing home well into her 90s.

The irony is, whether Aunt Delores actually cooked during the holidays or not I’ll never know. But she taught me something about cooking during the holidays. Be it turkey and stuffing, king cake, Yorkshire pudding or Pan Fried Catfish with Buttered Rice and Pickled Pepper Relish, you never know when or where a holiday cooking tradition may begin.

In a medium sized saucepan bring the rice, water and salt to a vigorous boil. Then stir the rice well, cover the pan with a lid and bring it back to the boil. Continue boiling for a few seconds then turn the heat down to a low simmer. Cook for 15 minutes. Take the rice off the heat, add 4 tablespoons butter and give the pan a stir, replace lid and leave it to stand for 10–15 minutes while you prepare the fish.

Rinse and dry the catfish fillets, laying them onto a plate in a single layer. Using fine meshed sieve or flour-sifter shake an even amount of the Wondra and spice mixture over all 4 fillets. Gently turn them over and repeat. 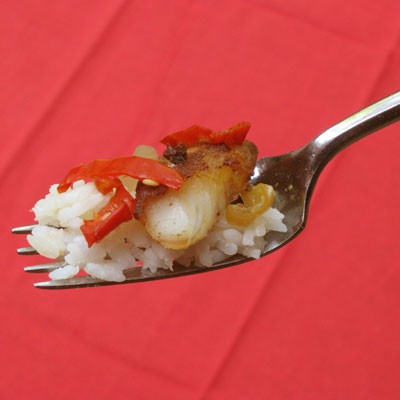 Heat the remain 4 tablespoons of butter and the canola oil in a cast iron or non-stick skillet set over medium heat. The skillet should be large enough to hold the fillets in one layer, otherwise work in batches.

When the oil is hot, but not too close to smoking carefully lay the fillets in the pan. Cook then about 2 minutes on one side with out disturbing them. Then flip them and cook them another 2 or 3 minutes until the fish is firm and cooked through but not overcooked. Remove the fish from the pan so that they stop cooking.

Chop the pickled peppers and some of their onions into a chunky relish. Serve the fish ontop of the rice with the relish on the side. 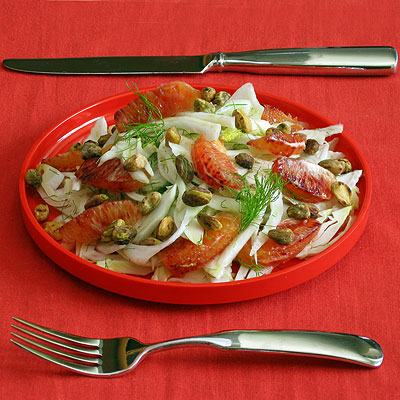