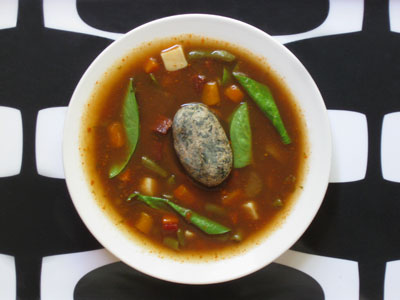 Do you know the tale of Stone Soup?

It’s a fable, I suppose. It is the story of an impoverished community, grown weary and fearful from hard economic times. The members of this community learn a simple recipe, and a lesson about life from a stranger.

The challenging economy we face today really got me thinking about this story and the simple moral it offered. So when the latest FoodBuzz 24, 24, 24 call went out I felt the timing was right. This fable could contain the message of hope we all need in our lives right now.

Our President knows his folklore. He is using language that evokes the lessons we all can learn from this tale. I believe his stimulus package is trying to achieve (on a huge international scale) the very same realignment of values taught in the story of Stone Soup.

It’s a simple lesson. One I wish we did not have to keep relearning. But it boils down to the idea that greed and selfishness is harmful, not just to you, but to your community.

But it also shows that there is hope when people connect with a common purpose. It may sound silly and simplistic. But I suppose that is why it is one of those plain and simple truths about mankind.

The concept for this party was simple. Invite friends and neighbors to a Stone Soup Party. It’s kind of like a ”pot luck”, but we choose to call it a “pot hope”.

I asked the guests to bring one small ingredient, something they did not need. Something seemingly inconsequential.

I promised to throw it all into a large pot. As in the story I provided a stone for the pot and one by one people added whatever they brought. I’d love to provide a recipe, but that is not the point…

It was an interesting event because not only was it a party – it was a mini-movie.

It’s funny what you learn about your friends when you do something like this. Everyone was excited about the process and the idea. People were very generous. We actually had to edit out some of the ingredients in the treasure trove.

In the end we made 3 stone soups because we had so much. They were all fairly simple. The biggest difference being one was beef, one was chicken sausage and one was vegetarian. I think the vegetarian direction is a new one, never before imagined in Stone Soup lore.

But like I said: this “party” was also a movie. I guess because I can be such a ham–bone I was so surprised how many people were uncomfortable appearing in the film!

We had the party in Palm Springs, at a friend’s house. Some of the guests drove in from Los Angeles. Some were desert dwellers. There were close to 30 people invited. But as much I begged and implored I could only get 10 or 12 of them to appear on camera.

It became a bit like a party game! Me begging, them retreating!

Fortunately, we started early in the day. We had a story to tell. My plan was to get a lot of the set-up shots in the can. The story could not be told simply by having people throw things in a pot as they arrived at the party.

I played the traveler. We got all my shots done early. That way (I thought) I could put my attention on making the soup later in the evening.

But “later in the evening” arrived almost immediately!

People arrived all at once. It was 6 pm…I stupidly did not account for the fact that the sun sets soon after. There simply was not enough light (or time) for all the shots I had planned.

I was very distressed!

Then I remembered there is another lesson to be learned from the tale of Stone Soup. That lesson is: Sometimes from nothing something special may occur.

As soon as I remembered this, I put down the video camera and the party started to rock!