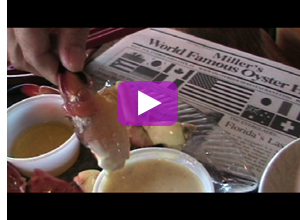 Paralithodes camtschaticus is most commonly known as the Alaskan King Crab, or more simply as the King Crab. But for our purposes here let’s call it by its lesser known, but equally correct name— Stalin’s Crab. That’s because the real KING in the crab clan is Menippe mercenaria, the Florida Stone Crab. Somebody in the species naming department sure got that one right. Mercinaria is Latin for “something of value”. I think a nomination for employee of the month is in order!

When I fixate on a food here at SippitySup, I research it, I cook it lots of times and lots of ways, until I find a method or recipe I think is best. Then I do a (sometimes silly) video and attach it to my blog. I may be taking a light tone but my goal is to pass on the best information I can.

We have an exception here with Stone Crab Claws. There is only one way to cook them and that is to “steam” them. Now, (here I go again) I am no chef, but Julia Child herself could not demonstrate steaming and make it interesting enough for a sophisticated viewer like you to enjoy. It’s just too boring

You simply boil salted water, and remove the pan from the heat. Then you submerge the claws for 5 minutes and strain. End of story.

I am not even sure why they call it steaming…it’s more like a hot tubbing! In fact, if it weren’t for the chlorine I am sure “hot tubbing” would be a fine method of cooking Stone Crab Claws.

What I am getting at is, there is no cooking in this video. But I hope it inspires a craving in you for really sweet, super meaty, dripping, juicy Stone Crab Claws. But with that craving comes a responsibility.

Stone Crab Claws are a Florida specialty. They really should be eaten in Florida and nowhere else. There may be a few other gulf states that have great Stone Crabs…but the claws from the 10,000 Islands area down thru the Florida Keys are the best on the planet. Don’t be fooled by those harvested in Mexico or Ecuador. Not only are they slightly different tasting, they are very poorly harvested.

The Florida Stone Crab is very well managed in that state. Thereby, it is considered a “sustainable” food resource. Fishermen (or women) harvest only one large claw from each crab. Captured crabs are then returned to the sea and will regenerate their missing claw. Another important factor that makes the Stone Crab a socially responsible culinary delight is there is no bycatch (inadvertent capture of other species). Additionally, there is very little habitat damage associated with their harvest. Stone Crabs are rated Eco-Best by the Environmental Defense Fund. Which means: “Enjoy often due to minimal ecological concerns”.

Personally, I adhere to a “Florida only” rule for other reasons as well, and as you may have guessed these reasons include taste and quality.

I have seen them on menus here in Los Angeles, and I have even seen them in grocery stores. But I’d lay money that those claws have been frozen. While freezing doesn’t ruin a stone crab “per se”, it does cause a texture change—- and that ruins it for me.

I’d rather go years with out eating them than eat them compromised in some way. Especially texture, because that meaty, stringy, juicy texture is a huge part of the experience.

While it is true you can get really fresh Stone Crab Claws shipped to you. And if you handle and store them properly they’ll stay in perfect condition 2–3 days. But it will cost you. The year I was born claws were 30 cents a dozen wholesale! Today 40 nice sized claws (about 8 lbs) will probably set you back $350 including shipping. That would make enough as an appetizer for 6 to 8 people.

Now I throw nice dinner parties, but not that nice!

They are cheaper at their source, but still not inexpensive in any way, shape or form.

The huge price increase is partly due to costs associated with the strict regulation I described. But wouldn’t you rather pay the high price than see the tasty, sweet, juicy, goodness of the Stone Crab disappear from our planet forever?

Oh, and one more thing, Alaskan King Crab, oops I mean. Stalin’s Crab gets an eco-worst rating “due to considerable ecological concerns and unknown contaminant levels”. So think about that when the overbearing guy in the next cubicle suggests what he calls “Crabby Mondays” for lunch at Red Lobster. GREG