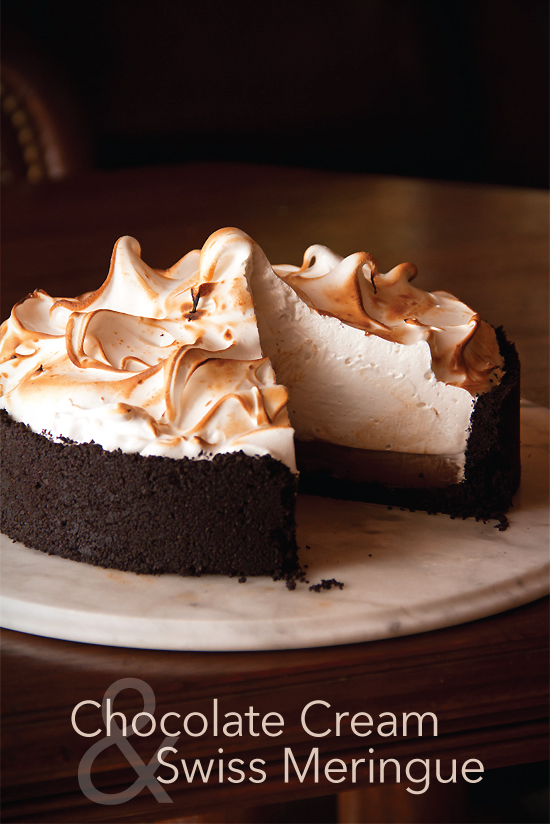 I realize it’s just 17 days into the New Year and Chocolate Cream Pie may not have been one of your resolutions. But it was one of mine. When I said I wanted to eat better I meant (you know) better. What’s better than Chocolate Cream Pie?

The older I get the more I realize that the most satisfying desserts are the sugary treats we craved as kids: cookies, sundaes, and anything with chocolate “pudding”. My version of Chocolate Cream Pie is a retro-inspired “pudding” dessert that will make your childhood self proud of the adult you’ve become. So when I say let’s all eat better this year, I mean bring on the Chocolate Cream Pie with its gravity-defying Swiss meringue.

Still, I understand that some of you out there may have meant something else entirely when you resolved to eat better this year. I support that too. In fact you can thank me for this post. By making this Chocolate Cream Pie and posting it here in blogland, I’ve fallen on my sword so to speak.

All you have to do is pin this pie. There are no calories in pinning. So pin away. Then pop on over to your Chocolatey Treats Pinterest board and virtually eat as much of this pie as you like. Which may be exactly your definition of eating better.

And for those of us who resolved to eat better (in a whole other way) I’ve included the recipe. We can indeed eat better while eating pie. It’s the kind of pie you remember from childhood– cranked up a notch. It’s got a cookie crust and rich topping that makes it both fun and sophisticated. It’s exactly how I define eating better. GREG 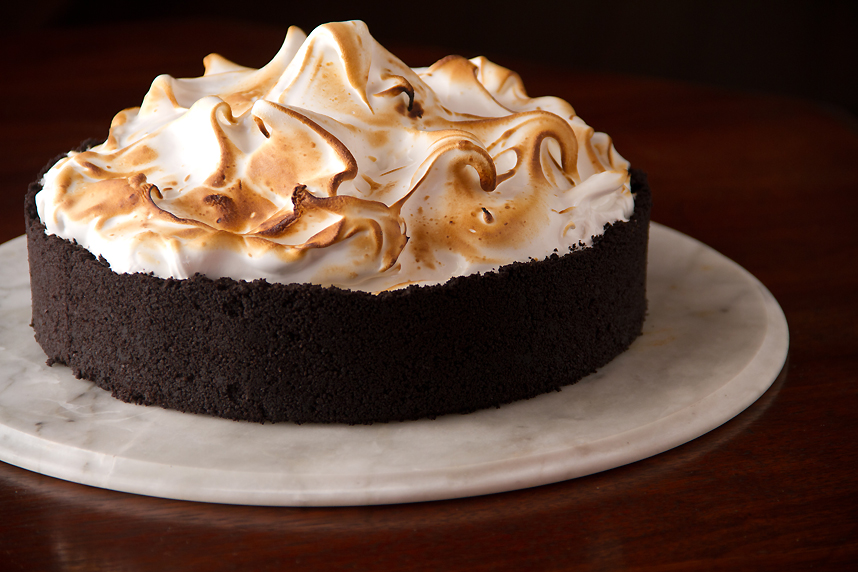 For the smoothest, glossiest peaks be careful not to over beat the meringue. 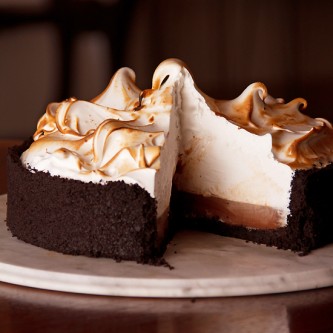 Place the wafers into the bowl of a food processor fitted with the blade attachment; pulse until finely ground. Transfer to a medium mixing bowl. Add the melted butter, and stir until well combined. Press the crumbs onto the bottom and about 2‑inches up the sides of an 8‑inch springform pan. Cover with plastic wrap and chill at least 30 minutes and up to overnight.

Pour the milk into a small bowl. Add the gelatin, swirling to combine. Set aside to soften in the milk for 5 minutes.

Meanwhile, pour the cream and 2 tablespoons granulated sugar into a small saucepan set over medium-high heat. Bring to a boil, stirring occasionally to dissolve the sugar. Add the gelatin and milk mixture, stirring to combine. Remove from heat and add the chopped chocolate and 1 teaspoon vanilla; cover, and let stand about 5 minutes to melt. Stir the mixture to assure the chocolate has melted properly.

Pour the mixture through a fine mesh sieve directly into the chilled crust; leave any chocolate or gelatin lumps in the sieve to discard. Carefully move the filled crust to the refrigerator to chill uncovered for six hours or up to overnight. You may elect to cover the filled crust with plastic wrap only after the filling has cooled completely.

Place the egg whites and 1 ½ cups bakers sugar into a heat proof bowl. Set the bowl over a barely simmering pan of water. Stir the mixture constantly until the egg whites are a bit warmer than body temperature and all the sugar has dissolved, about 3 minutes. You should not be able to detect any grit when the mixture is rubbed between your fingers. Use the whisk attachment of an electric mixer to beat the egg whites on medium speed until soft peaks form, about 5 minutes. Add the remaining ½ teaspoon vanilla; raise the speed to high and continue beating until stiff and glossy, but not yet dry (about 5 to 10 minutes more depending on your tools and method).

Remove the filled crust from the refrigerator. Using a rubber spatula, drop big heaps of the meringue on top, lifting the spatula to create peaks. Use a kitchen blow torch to brown the top of the meringue. You may alternatively brown the top in a preheated 500 degree oven. Watch it carefully as it will brown quickly.

Chill the pie well before serving. Carefully remove the ring from the spring form pan and cut into 8 slices, wipe the knife clean with warm water after every slice of the knife. Serve immediately. 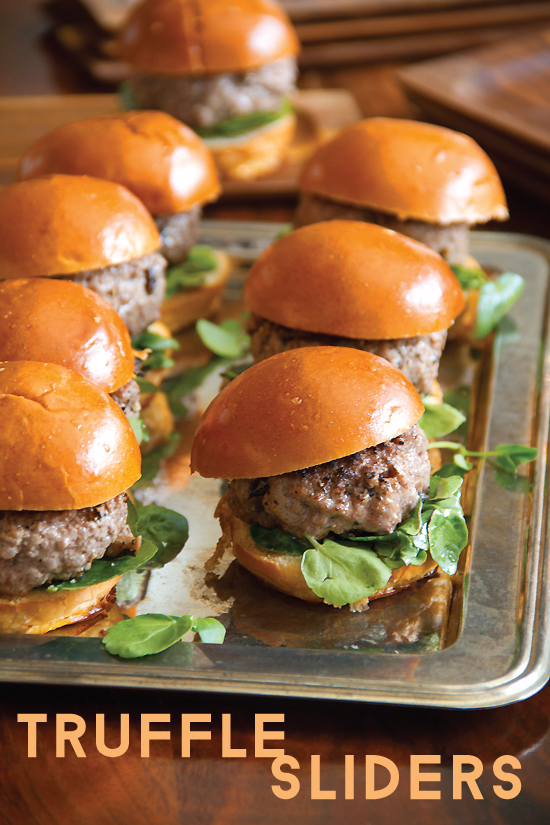