Beans For Soup Slow and Low 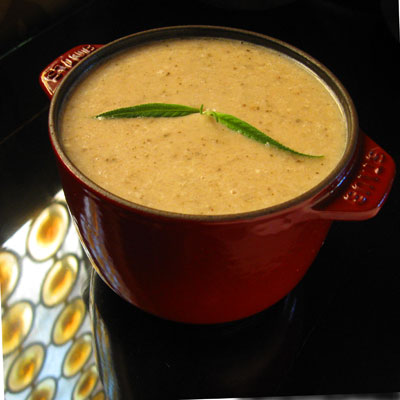 Am I boring you to no end? I realize that this is the 8th soup recipe I have posted in as many days. It’s the heat of summer and Sup’s! got soup! But my jaw is still broken…it seems broken bones take a while to heal.

I know it’s crazy. Maybe even boring. But at least I can try and make it delicious…

So today’s soup is a White Bean Soup with Fried Sage.

It is actually the most straight-forward of soups. It’s basically a mirepoix sauteed in olive oil and sage. White beans are added and the whole mixture is pureed to whatever texture suits your taste, and mandibular capabilities. 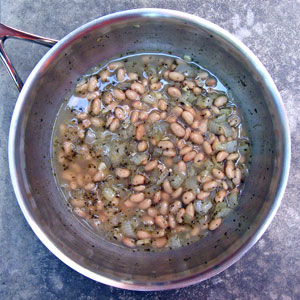 Dried beans can be a challenge to cook. They never seem to behave the same for me from one attempt to the next.

That’s because dried beans actually continue to dry after processing. This not only affects their taste, but an old dried bean takes longer to cook, tends to break down during cooking, requires more liquid and can have a slightly mealy texture.

So starting with quality beans makes the process more predictable. I like to buy beans from Rancho Gordo.

Still, I can’t say I never buy dried beans at the grocery store.  But when I do I often wonder how long they have been sitting around the processing plant, the warehouse, or my grocer’s shelf. This explains why dried beans can be so unpredictable to cook. No matter what the recipe says you can never really know how long to cook them.

And here’s another conundrum. There is a lot of misinformation out there about cooking beans. Contrary to popular opinion, beans do not need to be soaked overnight. While it is true that soaking speeds up their cooking time, the real question is why would you want to speed up their cooking time?

Beans benefit from a slow and low cooking process. Dried beans cooked with out presoaking take longer, yes, but they produce a much more flavorful broth.

A general way of cooking most any dried bean is this. Put them into a good-sized pot. If you are cooking a lot of beans a cast iron Dutch oven is best.  Cover the beans with plenty of liquid (water, broth or stock). I bring the level about 2 inches above the beans themselves. I like to salt the liquid before I cook the beans. You will read that beans should be salted late in the cooking process. Hogwash! A pound of beans should be salted with about 1 1/2 teaspoons good salt before you cook them, and then more salt to taste at the end as well.

Next I put the salted beans onto the stove top and bring them to a low boil. I usually add other flavor ingredients at this point. For this soup I added carrots, celery and onions (mirepoix) that had been sauteed in olive oil and sage.

Once they come to a low boil, put the lid on and stick it into a 300-degree oven. A pound of very “fresh” dried beans will take about an hour and a bit more. Questionable quality grocery store beans may take up to 2 hours. Some beans are more dense and tend toward longer cooking times even when fresh. So it’s best to check by tasting one for doneness.

You notice I suggest cooking beans in the oven. Almost every recipe I have seen says to simmer them on the stove. But beans not only like a low and slow cooking process they like as consistent a cooking temperature as possible. The cast iron pot enhances this consistency because it absorbs and retains the heat in a very dependable manner.

When you cook beans on the stove top the heat radiates upwards from the bottom of the pan so the beans at the bottom get more heat than the beans at the top. To compensate for this you need to remove the lid causing further heat fluctuations and stir frequently. Frequent stirring causes more of the beans to break up and get mushy. A properly cooked bean has a meaty texture and is not at it’s best when served mushy. The oven alleviates these two problems!

I also try and avoid adding more liquid to the pot as the liquid gets absorbed into the beans. Adding liquid during cooking is a bad idea for several reasons. Adding liquid causes heat variations which mess with the texture of the final product. Besides it’s only necessary if you added too little liquid in the first place, have a poor fitting lid, or opened the pot too often. Err on the side of too much liquid and you will be rewarded with a rich, earthy broth. Adding water late in the process leaves you with watery beans.

The other thing I always do with beans is to make them ahead of time.  I then let them cool in their broth before re-heating for serving, or in this case before I continue making the soup. That’s because osmosis is a powerful friend when used properly! 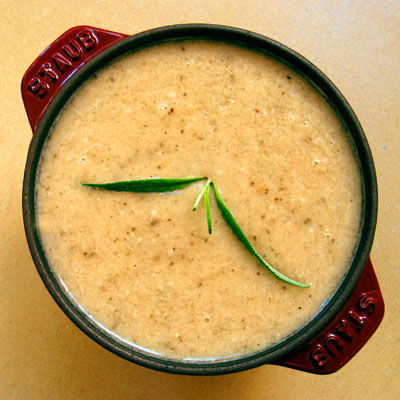 Heat the olive oil in a small saucepan. Add the garlic, carrots, onions and celery and saute them, stirring frequently, until the vegetables soften. About 6 minutes.  Do not let the vegetables color. Turn the heat off and add the chopped sage leaves.

In a large Dutch oven with a lid, combine the beans with enough broth to cover them by about 2 inches, 1 1/2 teaspoon salt, pepper and the sauteed onion mixture. Bring the pot to a low boil on top of the stove.

Cover the pot and bake until the beans are cooked, 1 to 1 1/2 hours or so. Season to taste with more salt, and pepper. Set aside to cool.

Once the beans have cooled puree them with an immersion blender to the desired consistency. You may need to add more stock to achieve the texture you would like.

To serve ladle the soup into soup bowls and garnish with a few sage leaves that have been fried in olive oil until crisp but not burned. 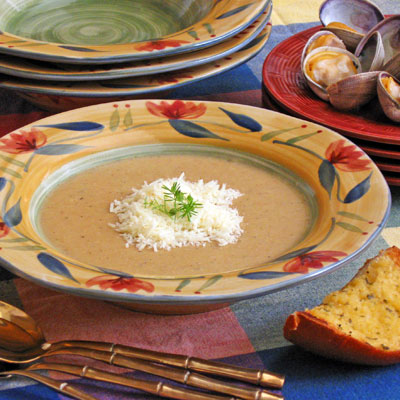