Aviation Cocktail- Out of the Clear Blue Yonder 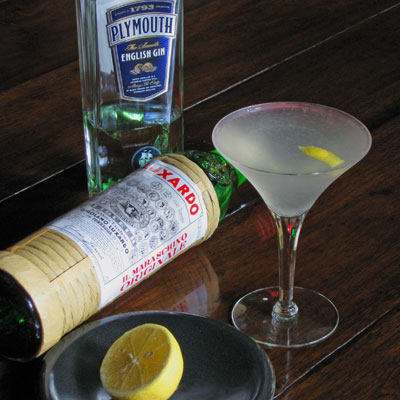 There is a new cocktail in my life. My friend Joe introduced it to me and once it was in my radar I noticed that it was popping up at the trendiest bars and swankest cocktail parties in L.A. It’s funny how that works!

But calling it new is just plain wrong. Because it is a classic cocktail whose previous heyday was in the 1930’s

It’s a rather glamorous little tippler with a deservedly glamorous name: The Aviation Cocktail.

I imagine its name could have come from the fascination at the time with the heroics of aviating pioneers like Howard Hughes, and Amelia Earhart. But I also read that the early commercial airline travelers needed all the chutzpah they could muster just to travel by plane. Their chutzpah may have come from this particular cocktail.

But to further muddy the historical waters (or maybe I should say cloud the chronoscopic skies) I have been able to confirm that The Aviation Cocktail existed quite a few years before Howard Hughes was setting records and winning flying awards.

Maybe the name Aviation Cocktail alone was enough to give this cocktail its 1930’s resurgence because a version of it can first be found in Hugo Ensslin’s, Recipes for Mixed Drinks, published in 1916.

Shake well in a mixing glass with cracked ice, strain and serve.

Today the most accepted and typical recipe for The Aviation Cocktail is from Gary Regan and his book The Joy of Mixology.  It goes like this:

Fill a cocktail shaker two-thirds full with ice and add all of the ingredients. Shake for approximately 15 seconds. Strain into a chilled cocktail glass. Garnish with lemon twist.

If you were to go into a bar today (granted a VERY good bar) you would get some version closest to these proportions. And just by reading it you can see that it is considerably sweeter than the probable original. The other big difference is the Gary Regan version omits the Creme de Violette.

It’s possible Mr. Regan left out the Creme de Violette because it’s just so darn hard to find. I live in Los Angeles where you can usually find just about anything and it was hard to find. I finally tracked down the Rothman & Winter brand at Wally’s. Though it was very overpriced at $27.95. I have seen it in New York for $22.95.

The omission of Violette by Mr. Regan may have been a purposeful choice. But the truth is more likely that Mr. Regan’s lack of Violette was not so much an editorial choice as an educated nod to tradition. A tradition stemming from an amusing little story attached to the be-all-and-end-all (to many mixologists) of cocktail books.

Evidently there was (is) a typo in its recipe for The Aviation Cocktail. The editors left the Violette out. They simply did not catch their mistake. So from 1930 onward most bartenders stayed true to the flawed recipe and also leave out the Viloette! The Aviation- Savoy version goes (something like) this:

Combine all ingredients with ice in a shaker, shake, and strain into a chilled cocktail glass. Garnish with a Maraschino cherry.

So now you have 3 versions of this classic cocktail and you still may have no idea about the all important taste factor! That is probably because you may be mixing up Maraschino liqueur with the syrupy red sweet liquid found in a jar of Maraschino cherries. They are not even close to similar, so do not think you can get away with substituting one for the other, you simply cannot! Grenadine also, is not the same thing.

Maraschino liqueur is brandy-like liqueur is made from Dalmatian Marasca cherries. It is not cloyingly sweet. But has nutty notes and an overall fruity quality. It is clear like water, but has a slight viscosity. It is far drier than the name might lead you to believe.

It’s nice on the rocks and pairs well with Campari (in my opinion). I sometimes make a light summer cocktail with equal parts of Maraschino, Campari and Club Soda.

I realize the Creme de Viloette is difficult to find. It can be left out, but do put the effort into finding it if you can.

The Aviation Cocktail itself is gin-based. The yin and yang of lemon and Maraschino (and optionally Violette) helps define the palate, but they should not overpower the gin. Use a very good gin. The slight background of juniper sits nicely on the tongue after each sip and is a crucial element. I use Plymouth.

In Los Angeles and San Francisco where I have been on Aviation crawls lately only the most traditional or the most seriously dedicated bars still make The Aviation Cocktail. If it weren’t for places like these this cocktail may have headed into oblivion unnoticed.

But The Aviation seems to be having a revival. And guess what? We have bloggers to thank for helping bring this one back. Most of the good cocktail blogs have covered this cocktail in the past 18 months or so.

The Aviation was once regarded as the prince of cocktails. But America’s taste for wine has seriously eroded some of these tippler’s classics. Causing the more unusual liqueurs like Maraschino to become scarce.

Now I like an excellent glass of wine, especially when paired with the right food. But I long for the sophisticated palate of an impeccably prepared cocktail sometimes and hope and pray we can keep some of these traditional drinks alive and well for a long time to come!

In helping make that sentiment a reality I have adapted The Aviation Cocktail to my tastes and offer you SippitySup’s The Aviation Cocktail. version of It is very close to the Savoy version, which was a bit bitter for my taste. I experimented with adding a bit more of the sweet liqueurs to offset the lemon juice, but found they overpowered the gin. Which is a great big no-no! There is a reason I drink gin over vodka. It tastes good! So in my version a scant bit of simple syrup completes the cocktail. 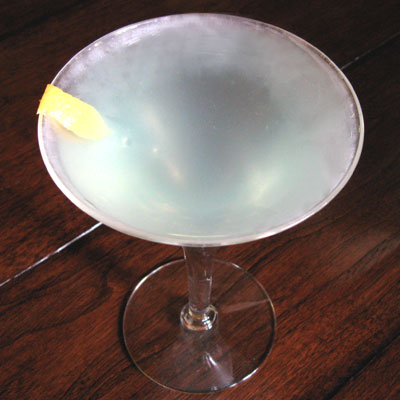 If you make my version (which includes the Creme de Violette) I think you will finally solve the riddle in the naming of this cocktail. It has nothing to with commercial airline travel, or the antics of Howard Hughes. Nope, the Violette imbues this cocktail with just the barest hint of the loveliest shade of sky blue.

Mix all the ingredients together in a cocktail with ice. Shake vigorously for 20 seconds so that tiny flecks of ice float in the drink as it is poured into the glass. Garnish with a Maraschino Cherry or a lemon twist.