An Apple A Day Won’t Keep Sup! Away 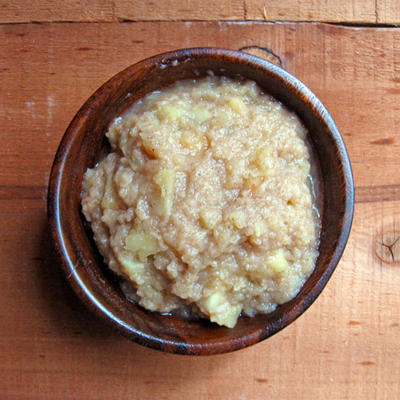 You know the rest of that phrase in the traditional sense. I know you do. But here at SippitySup that phrase means I have slipped into one of my moods and I plan to post an Apple A Day for an entire week.

That’s right, nothing but apple recipes for an entire week. It’s the perfect subject for a weeklong series too, because apples have become part of the culinary culture of these United States.

There are historical reasons why the apple is so popular here, especially in the northeastern parts of this country.

Pilgrims (yes of Thanksgiving fame) brought both seeds and cuttings to America. And though there is some discussion about the authenticity of a chap named Johnny Appleseed there is no denying that the tree has indeed found its way from “sea to shining sea”. 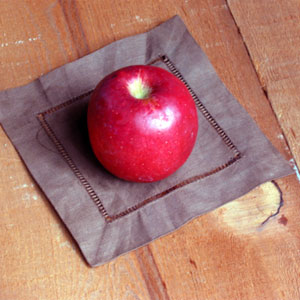 In the early days of this country sweet things were expensive, difficult to store and were just not the same sort of staple that they are today. In fact they were a luxury.

Thanks to the Pilgrims, apples were an exception to this rule. They were local, prodigious, and kept well in cellars. Meaning sweets would be available all throughout the winter.

However, apples certainly do not belong to the good people of New England. Apples fed the pharaohs. In ancient Greece tossing an apple at a young woman could get a young man married; should she decide (and be athletically inclined enough) to catch it! And of course in 1665 AD apples were responsible for introducing the theory of gravity into the mind of Sir Isaac Newton.

So you see apples ain’t so new. But they have certainly caught on. And there are plenty of reasons why each American eats approximately 19.6 pounds of apples every year.

One reason for their success is the fact that they stand well in savory preparations as well as sweet. This makes them a standard in so many cooked applications, especially in the autumn, when they are plentiful.

Apples are also very versitile. The fruit can be quite sweet ranging all the way to extremely tart. So there is an apple for every taste and every application.

But the most popular way to eat apples remains in hand and raw. Top of the heap apples best enjoyed this way include: Cortland, Fuji, Gala, Granny Smith, Jonathan, McIntosh, Red and Golden Delicious and Winesap. These are beloved for their crisp texture and juicy nature. But there are plenty of apple varieties that are considered heirloom or regional. So I suggest you taste what is available in your area and make your own mind up in this regard.

There is a bit more universal agreement when it comes to baking-apples. Cortland, Granny Smith and Rome Beauty all get high marks in the research I did. It seems to be that their ability to maintain their texture and flavor even under the stress of very high temperatures is the reason these seem to set the standard.

I am going ease you into apples and start this week by making a Chunky 5 Spice Applesauce. It will be delicious all on it’s own, but I also plan on using it as an ingredient in a recipe later in the week. So I’ll make plenty and hold some aside for just that purpose.

There is nothing wrong in leaving the peels on your apples when making applesauce. Again, it can make for a better texture, and often a better color. However, this applesauce will be doing double duty as an ingredient in another recipe.The peels will not be a benefit in that case. So no peels for me today.

I am choosing McIntosh. I think they are perfect for applesauce. But you can use any variety that makes you happy. Applesauce is one of those recipes that are not really recipes. There is no wrong way. My method will yield about 6 cups.

To get this going peel 4 pounds of apples, then core and quarter each one. You may hold them in some slightly acidulated water to keep them from getting brown (oxidation) if you like. But it is not necessary. In the end it will make no difference.

Once ready to start add the apples along with 3 cups of unfiltered apple cider to a large stockpot. Bring this to a boil, then cover the pot and lower the heat to a simmer. 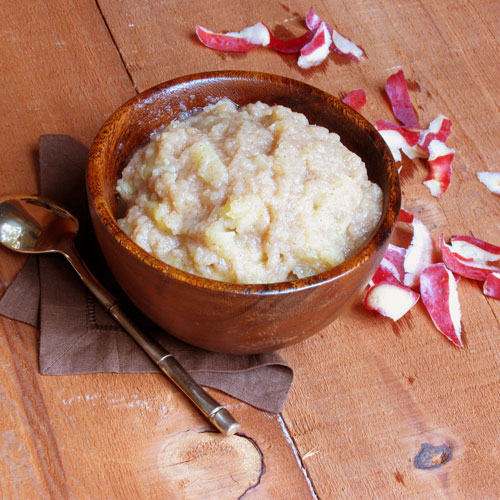 Cook the spice into the mixture another 8 or 10 minutes. The apples should become rather soft and begin to break apart. Most of the liquid will have evaporated as well.

Get two large mixing bowls and divide the apple mixture evenly between each bowl. Let the mixture cool somewhat before proceeding.

Using an immersion blender, puree the contents of one bowl until quite smooth.

Moving to the other bowl of apples, using a large fork or the back of a wooden spoon, break these apples into chunks. Use your judgment about just how chunky you think they should be.

Pour the contents of one bowl into the other and mix well. Taste for sugar and spice and adjust as needed.

Store in an airtight container for as long as 5 days. 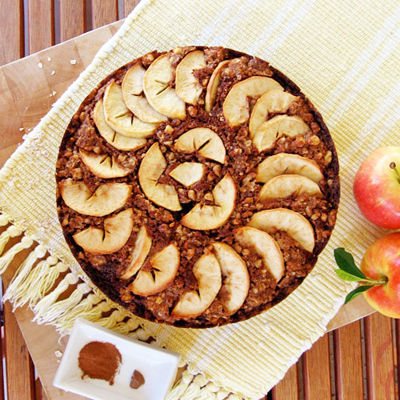