The 3 P’s of Flatbread: Pear, Prosciutto & Provolone (with Candied Pecans too!) 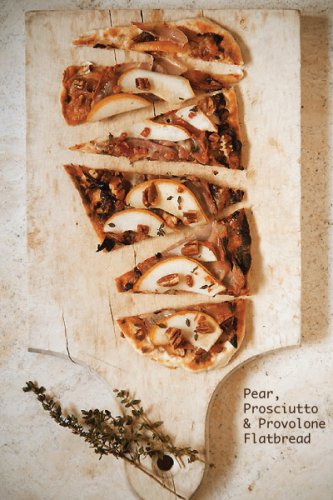 I’m a big fan of bread cooked in a skillet or on the grill. This pear, prosciutto & provolone version with candied pecans is typically called a flatbread. Which is a sort of rustic precursor to pizza, because flatbread was around a long time before the first oven. In their simplest forms they need only a single hot surface on which to cook. Before man invented the oven he invented fire. So early flatbreads were no doubt cooked by the embers of a dying fire. Which is a pretty romantic notion.

When I make flatbread I’ll typically cook the dough before I top it with something delightful and finish it in the oven. To me this is what distinguishes flatbread from pizza. But that’s probably an oversimplification. Because almost every culture has some sort of traditional flatbread. Sometimes levened, sometimes not. Here is a list of just a few: Khubz (Morocco), Bhakri, Chapati, Dosai, Naan, Pappad, Paratha, Puri, (all Indian or Sri Lanka, Aish Mehahra (Egypt), Lavash (Armenia), Sangak (Iran), Sanchuisanda, Flatbrod (Norway), Arepa (South America), Tortilla (Mexico).

Which is quite an impressive (though only partial) list. I’ve decided that flatbreads have evolved to the point that they can cross cultures. You can go traditional if you want to but you don’t have to. I loaded this one up with all P foods: pear, prosciutto, provolone and pecan because I think that’s a bit of silly (yet delicious) fun. But flatbread is loaded with possibilities and is endlessly variable. You could choose a completely different letter of the alphabet for your toppings if you liked. Because these slightly charred chewy bread bases are a great vehicle for delivering all the color, crunch, saltiness, creaminess, even a hint of sweetness, you could want in a single bite. GREG 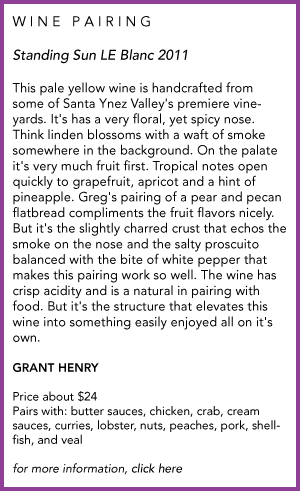 On a lightly floured surface divide the dough into 6 equally sized flattened balls, then thinly roll each into 7 or 8‑inch rustic shapes or rounds using a lightly floured rolling pin. Set aside to rest about 15 minutes lightly covered, until ready to cook.

While flatbreads rest heat the oil in a large cast-iron or other heavy-bottomed skillet. Set over medium-high heat. Add onion to pan; cover and cook for 3 minutes. Uncover, lower heat to medium and cook 10 minutes more until golden with edges beginning to brown, stirring often. Deglaze the pan with sherry vinegar, stirring until evaporated. Remove from heat and set aside.

Use a paper towel to wipe a bit of vegetable oil onto a another cast-iron or other heavy-bottomed skillet. Set over medium-high heat. Once the skillet is quite hot, cook the flatbreads, one at a time, until puffed and dark brown in spots, about 1 1/2 to 2 minutes per side. Set aside.

Divide the onion mixture evenly on top of each; sprinkle them evenly with most of the cheese. Top each with a prosciutto slice, pear slices, a sprinkle of the remaining cheese and some white pepper.

Heat broiler to high. Place as many of the topped flatbreads on a broiler pan as will comfortably fit and broil until the cheese is slightly charred and the flatbread edges are beginning to brown, about 4 minutes depending on the distance from the heat source. Repeat with the remaining flatbreads.

Transfer the flatbreads to a cutting board or serving plate. Sprinkle each with nuts and thyme leaves. Slice and serve warm. 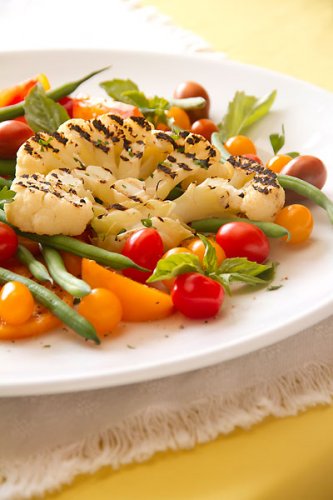