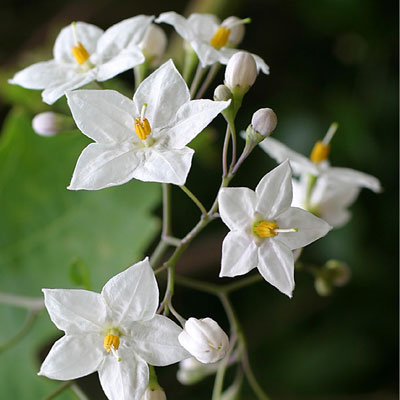 Hopefully I am not stepping on “you know which Spuds” toes. But today I am talking tater.

I got a handful of new potatoes from a gardener friend recently. It’s tempting to think that new potatoes are a specific variety of potato. But that is inaccurate.

New potatoes are actually immature potatoes dug shortly after the plant begins to flower. They can come in almost any variety. In other words you could have Yukon Gold new potatoes AND Red-Skinned new potatoes. Popular varieties of potatoes that are often harvested early and referred to as new potatoes are Maris Bard, Premiere and Rocket.

I have often heard people say fingerling potatoes are new potatoes because they are the immature version of some particular type of potato. This is not exactly accurate. Fingerlings are indeed a named potato variety and there are several types: Australian Crescent, French Fingerling, Rose Finn Apple, etc. Which is not to say you canâ€™t get new potatoes that are indeed fingerlings. But they would be fingerling new potatoes, just as an immature Yukon Gold would be a Yukon Gold new potato. 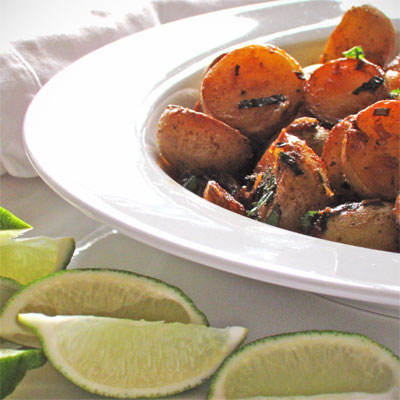 Mine are Yellow Finn new potatoes, which when fully mature are great all-purpose potatoes. They have a yellow flesh, creamy texture, and buttery flavor similar to the very popular Yukon Gold though noticeably sweeter than the Yukons.

You need to go to the farmers market or know someone growing potatoes to get true and authentic new potatoes. That is because new potatoes do not store well. They have a very short shelf life and need to be used within a few days of digging.

I do not want to burst anyone’s bubble but when you go to Trader Joe’s and you get that cute little bag of baby red potatoes you are not getting new potatoes. The baby reds in the grocery store have been through the hardening off process needed for storage and long distance travel. They are good, but still not the same as a new potato.

New potatoes have a fluffiness and a sweetness that older potatoes whose starches have developed more just cannot match. The skins are very thin; practically non-existent and these skins are loaded with vitamins. So there is never a need to peel a new potato. In fact peeling would be a shame.

New potatoes are a particularly good canvas for other flavors in my opinion. Butter and parsley is a classic example of new potato perfection. But sometimes I feel like getting in the kitchen with a particularly lovely ingredient and “winging” it.

That’s what I did with these potatoes. 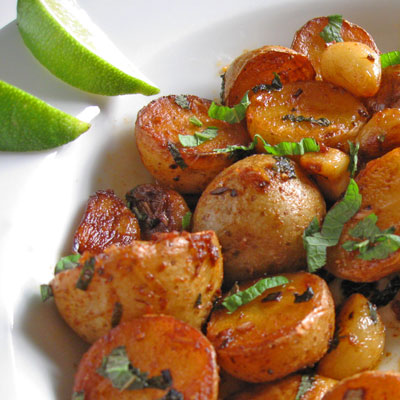 I am calling the dish Garlic New Potatoes with Lemongrass and Mint.

Note: You may substitue new potatoes for any small creamy potato.

Heat the sesame oil in a large saucepan set over medium-high heat. Add the lemongrass and ginger and cook a few seconds until you can smell them. Add the potatoes and garlic.

Let them all cook for several minutes undisturbed. Your goal is to let one side of the potatoes and garlic get quite brown.

Once you have achieved this stir the pan and continue cooking until the potatoes begin to soften, stirring once in a while. About 8–10 minutes.

Season with salt and pepper. Then carefully add all the stock and about half of the water. Be careful, oil and water may easily splatter and burn you.

Add the cayenne, cumin and paprika, stirring to combine the ingredients.

Cook until the potatoes are tender. You may need to add the additional water to achieve this.

When ready to serve pour the limejuice over everything while the potatoes are still hot. They will absorb more lime flavor this way. Garnish with mint and enjoy.

I think you know why I chose the name Garlic & New Potatoes with Lemongrass and Mint too. Yep, â€˜cuz these are new potatoes with garlic lemongrass and mint. As you can see there is also a bit of ginger, some cayenne pepper and cumin; plus a pinch of paprika for color. Oh yeah and that big squeeze of lime at the end. But if I named these Garlic New Potatoes with Lemongrass, Mint, Ginger, Cayenne Pepper, Cumin, Paprika and a Big Squeeze of Lime, Iâ€™d lose you at â€œhelloâ€.