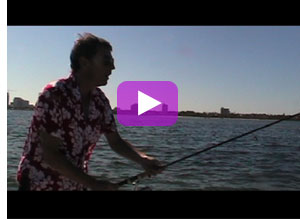 I get it! Some people are afraid to cook fish at home. But I can’t really figure out why. Statistics show that people like to eat fish. Americans are now eating 30 lbs of fish (per person on average) a year in restaurants, but they eat half that amount at home. And of the home-consumed fish, half of that is canned tuna fish. Now, unless my math skills fail me, that means people eat more than 3 times as much fish in restaurants than they do at home (if you exclude all that canned fish). It’s like 10th grade PSAT’s!

So, where does the fear come from? Choosing fish?

Why do most of us have no trouble picking out a fine, juicy steak at the market, but a flounder fillet leaves us (well, you know) floundering (gosh I’m funny!).

Buying fish is no more a mystery than buying fresh veggies…that’s because the key to both is buying fresh. The signs of fresh fish are these:

—A firm, springy flesh. If you press your thumb into the meat it should bounce back with almost no perceptible indentation.

—-When the fish or fillet has skin on it, then the skin should be bright and shiny. Almost metallic. Dull or splotchy is usually a bad sign.

—The liquid given off from the fish should be clear and clean. If it looks cloudy or milky…back off.

—If it’s a whole fish, check out the gills. They should be a rich red. If the fish is old, they will turn brownish or brick colored.

—Should you be choosing fillets, then your best indication may be smell. Fresh fish smell sweet and clean. Like the ocean on a cool, bright day! Not like the scummy fish tank your college dorm-mate down the hall kept during your first semester of college…or was that just my crazy dorm-mate? Either way, fresh fish does not smell fishy!

—But the best way to buy fresh fish is from someone or someplace you trust. Build a good relationship with the people at your market. Ask questions. Most people are proud to pass along the special knowledge or skills they have learned on the job. Ask smart, respectful questions and your fishmonger or grocery clerk will remember you. Then next time you’re in, it’s very likely that they will point you in the direction of something particularly good, fresh and yummy!

Now that wasn’t so hard. You can’t still be afraid…so put down the tuna can, and start paying attention. I can help you!

Once you have chosen good fish how do you cook it? Well I hate to be a smart-ass, but in truth it’s no harder than cooking potatoes. I’m serious. You can fry, bake, boil, broil or sauté. Really it’s that simple.

Notice I did not say microwave. That’s because I think the microwave is a horrible way to cook fish. I do not say this because I am one of those ninnies running around screaming about the gamma rays that will radiate us via microwaved pizza! Nope. Microwaves have their place, but it’s nowhere near fish.

This is a minority opinion, but it’s one I stand by. You will find many respectable chefs and plenty of ranty-bloggers who swear it is a great way to cook fish. Now I admit a microwave will get fish “cooked”, but that’s just not the same as “cooking” fish. The nuances in that statement are many and I’ll leave it to you to sort out your own interpretation.

I will also put to rest another falsity concerning microwave ovens. They do NOT cook food from the inside out. If they did they would be a terrible way to cook everything except Swiss Miss Instant Cocoa!

Microwave ovens heat (and cook) food by emitting microwaves into a small-enclosed space. This space has metallic walls that reflect and bounce these waves all around the interior of the oven.

In the process they “excite” the water molecules IN the food. Which, as a by-product of this excitement, release energy in the form of heat (it’s starting to sound sexy, huh…). So the outer areas of the denser foods (like meat and some veggies) are cooked by the heat created by their own excited water molecules and the interiors of the food is cooked by the heat radiated by the outer portions of that very same food. So the food is cooked from an energy whose source is inside the food itself, rather than from an exterior source of heat. That is why people (wrongly) say microwaves cook from the inside out.

Which has nothing to do with why I think microwaves should not cook fish. I hold this position because cooking in a microwave is like watching Paula Deen on the Food Network. Intellectually you understand that cooking is happening, but you are nothing more than a spectator. But she does make you smile doesn’t she!

I have tried and tried pressing my nose against the door of the microwave to gauge the “doneness” of a particular food. But between the darkened glass window, and that infernal spinning it’s impossible to keep your eye on the prize. You can sometimes form a mental picture of the food if you watch it spin, then clamp your eyes shut real quickly…and hold them closed. Then, oh so briefly, an image may appear in your mind’s eye of the food the moment you took the “photo”. Kind of like a camera obscura. But it’s hard to do and takes a few attempts and by then, well the fish is overcooked anyway!

What I am trying to say is fish is a hands-on food. It likes a little lovin’… a little attention. You gotta see it, feel, touch it, smell it while it’s cooking. And you will be rewarded.

The last trick to cooking fish is choosing which form of cooking is most suited to your “catch”. A lot if this is just to your own taste. If you like fried fish then you’ll like fried salmon as well as fried haddock. Heck you might even like fried boot leather if I told you Mario Batali cooked it (oops, did I say that out-loud?) Anyway, same goes for baking, broiling, boiling and sautéing.

I get sad when I see a gorgeous fillet of salmon cooked so far past done that it’s hard to imagine what it once was. Salmon should be slightly rare. It just should. But it’s a fatty fish and somewhat forgiving…so many people overcook it with out ever realizing what they have done.

On the other hand, swordfish left too rare does not bring out its best qualities. Yet overcooked swordfish (unlike the salmon) is dry and nearly inedible. Achieving that perfect state of doneness can be more easily accomplished by wisely choosing a cooking method.

Rather than make a list of every fish we can think of and try to suggest a perfect cooking method let’s break things down into 3 categories. Not-Fatty Fish, Sorta-Fatty Fish, and Fatty-Fish.

Not-Fatty Fish typically have less than a 2% fat content.

These fish are often cooked by poaching, steaming and pan-frying. It’s a bit harder to dry these fish out through overcooking because they benefit from a wet cooking method. But that can’t stop you from actually overcooking them, which really ruins their texture. This kind of fish also tends to flake and fall apart when cooked which limits the manner of cooking somewhat. Deep frying is also a good method, but it’s quite easy to overcook fried fish. So watch it closely.

I think pan-frying is best for these because these are the fish that can easily dry out if overcooked. So they need attention. Or if you’re a really good cook you can add many benefits by marinating, or stuffing, as my brother illustrates in this video! These fish may also be baked, broiled, roasted or grilled, but again…give them some attention because it’s even easier to overcook them this way.

High-Fat Fish typically have between 6% and 12% fat content. But the Herring has a whopping 18 % and it’s “good fat”!

Grilling works well with higher fat fish, because they have a rich flavor, and the smoky quality of the grill lends itself to this. Plus they are often “meatier” than lower-fat fish. But pan frying, roasting, and baking is also very, very good. But my favorite way is it to slow-cook these fish. I put them into a 225-degree oven for about 18 mins for 1 1/2” thick fillets. Then I turn the oven off and leave them in there a couple of hours with out opening the door. The texture is incredible. I can’t explain what happens, because not only am I not a chef…I am not a scientist (hey Skyla!), but what a transformation it is! Don’t be squeamish about leaving the fish out so long either, you know that just makes me mad. So trust me and try it! Of course, use fish from a trust worthy source– and don’t sue me if you get sick. I had to say that…I don’t really believe you will have a problem. GREG