It’s time to say goodbye to corn with a Corn Brulee. It’s been seven great days of corn recipes and I know we’ll all be sad to see it end. But sweet summer corn will be around for at least another month so the end of this series doesn’t have to mean the end of corn for any of us (in this hemisphere!).

For this last of my corn recipes, I am going to do a corn brulee. It’s a corn-sweetened custard with whole kernels topped with spicy candied bacon and served with a very savory tomato sorbet.

Although the custard is made sweet with the infusion of corn, this is not what I’d consider a dessert. In fact, I am serving mine as a first course and my brother Grant is pairing this custard with Vouvray.

But before we get to the wine let’s recap this madcap week of corn recipes. It’s hard for me to pick a favorite, so here they are in reverse chronological order: Fresh Corn & Sun Dried Tomato Angel Hair Pasta, Old Fashioned Corn Chowder, Corn & Zucchini Fritter Stacks with Bacon and Avocado, Seared Scallops with Succotash, Grilled Chicken with Raw Corn & Grilled Bread Salad.

We started with Grilled Corn with Feta & Lime. It’s the only on-the-cob recipe I presented this week and I saved its mention for last because I thought I’d end this week of corn with some valuable tips on removing corn from the cob. Of course, they sell devices for just such a chore, but I personally don’t like to have tools cluttering up my drawers that only have one job in life. So I rely on a chef’s knife to get the job done. 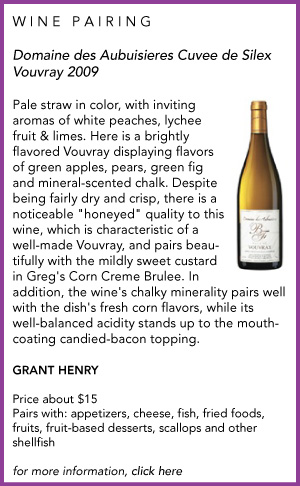 But a knife alone can be a bit awkward, messy and dangerous. I have scoured the web and my bookshelves and brought you some information designed to make the task easier.

Fine Cooking suggests cutting off the stem then cutting the ear in half and standing it up on one of its flat ends and simply slicing down vertically on one side without cutting too far into the cob’s harder core.

In the book “How to Break an Egg,” this method is taken a step further: Ears are dipped into boiling water for a minute or two then rinsed in cold water. According to the book, “This ‘sets’ the milk so it doesn’t spurt when you cut the kernels off the cob.”

Martha Stewart Living, on the other hand, prefers to leave the stem on (as a handle) and cuts a flat piece off the tip. You can then work the knife straight down the exterior of the whole cob.

Simply Recipes has a rather ingenius suggestion too.  She likes to remove corn kernels from the cob using a bundt pan. This way you can stand the shucked corn cob upright, with the tip of cob placed in the center hole of the bundt pan. Simply hold the cob steady, use a sharp knife and make long downward strokes on the cob, separating the kernels from the cob, which are collected in the pan. 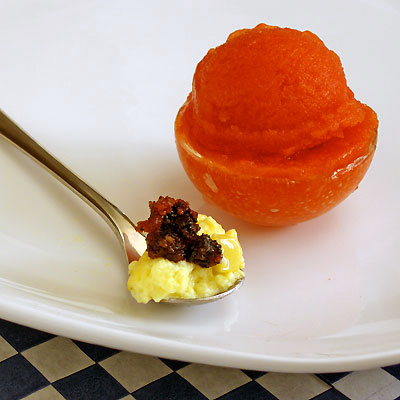 To make the sorbet: You’ll need to start the sorbet at least one day ahead so that it will harden properly.

Prepare an ice water bath. Cut a shallow X in the bottom of each tomato. Drop them boiling water to blanch about 30 seconds and then transfer into the ice water bath. Skins should peel off easily with a small, sharp knife. Quarter them and remove the seeds, then puree them in a blender.

Add the water, corn syrup, paprika and milk powder (if using) to a medium saucepan. Bring the mixture to a simmer, stirring occasionally. Remove the pan from the heat. When cool, mix in the tomato puree.

Place mixture in an ice cream machine and process according to manufacturer’s instructions. Scrap the sorbet into a container with a lid and freeze until hard. Overnight is best.

To make the spicy candied bacon: Roughly chop the bacon, then transfer it to a food processor, along with the brown sugar and cayenne. Pulse 10, or 12 times until a coarse, crumbly mixture is achieved.

Heat a cast iron skillet over medium-high heat. Add the bacon mixture and cook stirring very, very often until the bacon begins to cook and the sugar caramelizes. Do not cook it to very crisp and do not let the sugar burn. Taste often. When the bacon is cooked but still a bit chewy remove it from the pan to stop cooking and transfer it to a plate to cool.

To make the corn brulee: Preheat oven to 300 degrees. Bring the cream, reserved cobs, and sugar to a simmer in a pot. Remove from heat, and cover 30 minutes until flavors develop. In a medium-sized bowl whisk the egg yolks until well aerated and lighter in color. Strain the cream mixture while whisking into the same bowl, discarding any solids. Wash out the saucepan and put the cream and yolk mixture back into the pan. Bring to a simmer, stirring and scraping the entire time until the mixture thickens somewhat. Strain the mixture again.

Divide the corn kernels into four 6‑oz ovenproof ramekins. Top each with about 1/4 of the cream mixture, leaving about 1/4‑inch of space to the lip of the ramekin. Set the filled ramekins into a baking pan. Fill the pan about 1/2 way up the sides of the ramekins with water and carefully transfer to the oven. Bake until custard sets, about 45 minutes. Cool completely.

To serve: Roughly chop the candied bacon into a gravely mixture. Divide it evenly on top of the 4 ramekins, spread to cover well. Place the ramekins under the broiler until the bacon mixture begins to bubble. Remove from the broiler to let cool completely. Alternatively, you may use a small blow torch to caramelize the candied bacon. Serve at room temperature with a small scoop of tomato sorbet. 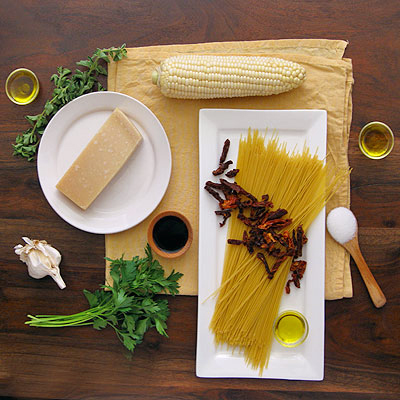 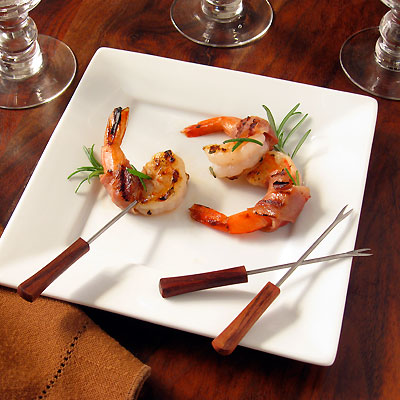