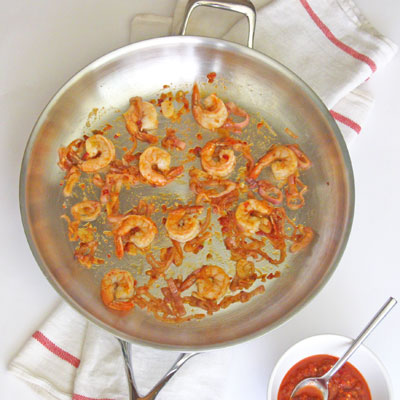 Now look around you. As you can see every single one of you is raising your hand. Which just proves one of life’s clearest maxims. Everyone likes shrimp. I say that all the time. I say it in my sleep. Or so I have heard…

So it’s good to have a lot of shrimp recipes in your back pocket. I hesitate to call this a recipe though, because I made it up with just a few ingredients from my nearly bare refrigerator (I have been traveling, give me a break).

Also, I have been jonesing for spicy in a big way. I seem to be stuck on Vietnamese flavors ever since over-indulging on really good Vietnamese cooking in San Francisco last week.

I was in fact considering a week of nothing but Vietnamese here at SippitySup. But in truth my culinary skills in this area are a bit limited. I have been spending quite a bit of time at Noodle Pie and Sunday Night Dinners hoping to remedy this dearth of knowledge. But I don’t think I am ready for a week of Vietnamese yet (emphasize yet– you know I like a challenge). 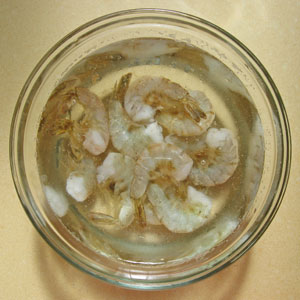 Still, that won’t stop me from making a shrimp dish that will quell my hunger for three important things: shrimp, Vietnamese flavors, and of course red-hot chili peppers.

I am calling this recipe Spicy Vietnamese Shrimp. Not a super original moniker I know. But like I said these are the 3 things I am craving so we might as well cut to the chase. If you know what I mean.

The chase starts with a pound of medium-sized shrimp (they cook faster). Mine were frozen, ‘cuz like I said, I have not been shopping. The shrimp should be peeled and de-veined, but I prefer to leave the tails intact. And yes I eat the tails. Why does that gross people out?

The next step is to slice up 4 or 5 garlic cloves and 1 medium sized shallot. Get them as thin as you can because we are cooking these things fast. I can’t wait much longer for this trifecta.

Heat a fry-pan and about 1 tablespoon of canola oil until it is nearly smoking hot. Throw in the garlic and shallots and stir them until softened and beginning to brown. 1 or 2 minutes should be plenty. You could make this dish in a wok, it would probably be easier, but I chose a stainless steel fry-pan. Only because I plan to photograph these shrimp and my wok has not been ready for it’s close-up in over 12 years. It’s a sight only its father can loveâ€¦and I do love it. My Demeyere fry-pan is far more photogenic. 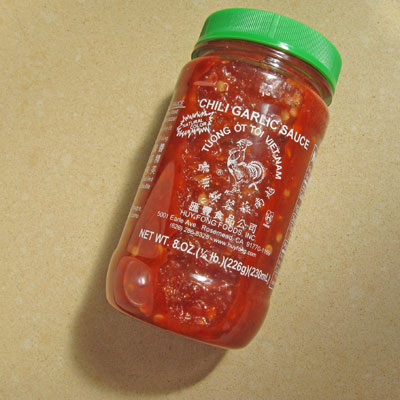 Add 2 or 3 tablespoons of a good Asian chili sauce. I am using a prepared Tuong Ot Toi (Vietnamese chili garlic sauce) because it’s one of those things I always have in my fridge (even when it is nearly empty).

This is a perfectly good chili sauce. It is quite hot. Not as hot when I make my own (I use habanero), but it is hot enough to be perfectly acceptable in this recipe.

One more thing, and I am putting my foot down here. I do not want to hear any complaints about spicy food. Buck it up. This is Sup. There is no room for wimps. And no. You can’t substitute ketchup. So don’t ask.

But please (please) don’t worry too much about the heat. Because I am going to balance all that heat with a tablespoon of sugar. I don’t believe sugar actually brings the heat down. But it does deepen the flavor, causing taste buds from several areas of the tongue to join the party. I think this makes the heat work in conjunction with the other flavors (like sweet shrimp). So it’s not so one-note of sheer blazing heat (vinegar works too, this is just my theory I have no proof to back this statement up).

Once these ingredients are in the pan you are ready for the shrimp. Toss them in and cook them until they have just turned pink. This should be about 3 minutes. Don’t overcook them because even the hottest sauce in the world can’t save over-done shrimp.

Pour the shrimp and it’s sauce onto a serving platter. Season them with a little salt and pepper and a few teaspoons of Asian fish sauce. 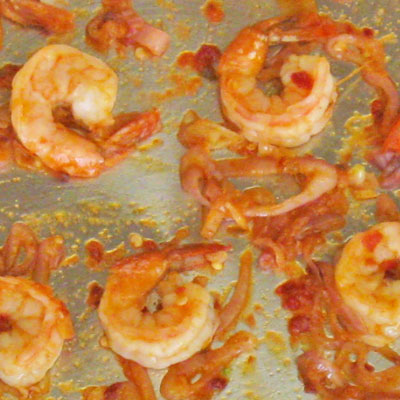 This would be fabulous with some coconut noodles and pan-seared bok choy. But like I said I have been away. The fridge really is bare. So I am serving mine with white rice and some old limp celery sticks. It’s the only thing green I can find.

But hey, who cares when I have Spicy Vietnamese Shrimp in the house!