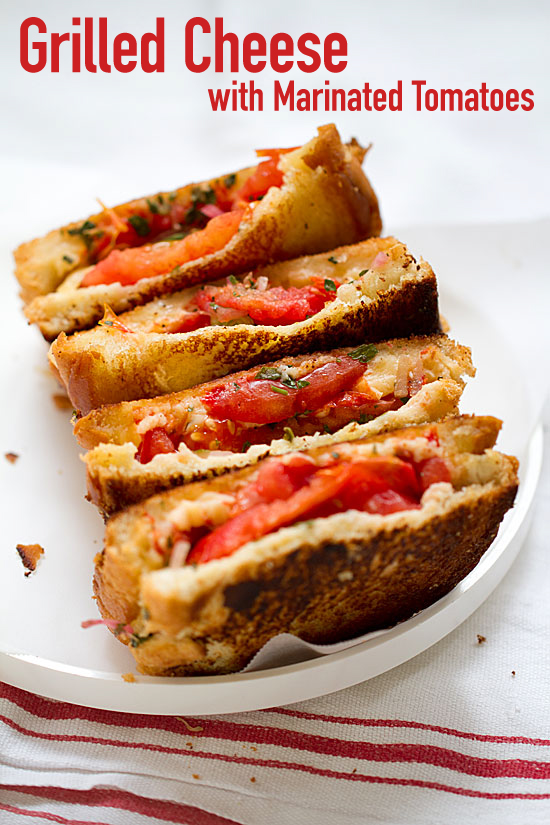 Look at me – breakin’ all the rules. Don’t I even read my own words? Haven’t I said plenty of times that Florida grown, mass market tomatoes in January are crap? Better to be skipped and mourned than choked down like sliced hockey pucks. Why can’t I follow my own advice? Well, because (as with all rules) the “no tomatoes in January” rule was made to be broken. I’m not saying I would serve them in a salad and I certainly wouldn’t serve them on a sandwich. Or would I? There’s a trick to eating tomatoes out of season: oil and vinegar. Marinated tomatoes can be served in a salad or on a sandwich. A perfectly seasonal Smoked Gouda and Marinated Tomatoes Grilled Cheese Sandwich.

Typically, I only buy and eat in-season, locally grown tomatoes. Which for me is not that difficult. I live in Southern California, my Farmers Market is open all year long and vine-ripened tomatoes are available from one farmer or another 10 or 11 months out of the year. It’s no great sacrifice to forgo tomatoes for the 6 to 8 weeks that constitute winter in Los Angeles.

Recently, the LA Times (like a lot of bloggers) did a roundup of 10 Great Recipes from 2015. One of the recipes they included was for Grilled Cheese with Marinated Tomatoes. This recipe seems to have been developed in the test kitchen of the newspaper and first appeared in May, 2015. In most of the country May is still a little bit early for good tomatoes. In So Cal there’s no problem getting good tomatoes in spring, so May seems like a reasonable time to run a tomato-centric sandwich. But I remember making a mental note to revisit the recipe in August or September when our tomatoes go from good to mind-boggling. Only I didn’t. The recipe slipped my mind. I guess our summer tomatoes were so mind-boggling that I ate most of them simply sliced and served.

With that mindset I was surprised when, come January 2016, the LA Times re-ran the Grilled Cheese with Marinated Tomatoes recipe. I thought to myself: Darnit, how can they tease me like this? Why would they run a tomato sandwich during the brief time of year I forgo tomatoes.

But then I thought about it some more. Maybe they know something I don’t know. I’ve roasted out of season tomatoes and was rewarded with intense tomato taste. Could something similar happen with marinated tomatoes? So I scooted myself out the door and to the grocery store where I bought the tomatoes of my nightmares – January tomatoes, as pale as a baby’s bottom and hard as asphalt. The kind that lack flavor because they weren’t bred to taste good, they were bred for enduring cross-country, wintertime journeys to the supermarket. My supermarket.

The LA Times Marinated Tomatoes recipe calls for “very ripe large tomatoes”. My January tomatoes were very large but they were not at all ripe. Still I persevered. I placed the tomatoes on my kitchen windowsill and waited until they got as ripe and red as I thought they could and then I marinated them as instructed.

Surprisingly, the end result is delicious. No, they’re not at all like summer tomatoes, but they have a luscious, silky texture. The acidity gets boosted from the vinegar. Herbs add the complexity typically lacking in raw January tomatoes. Add to that smoky cheese and toasty, buttered bread and you’ve got a sandwich that breaks the rules by earning a permanent place in my January rotation. GREG 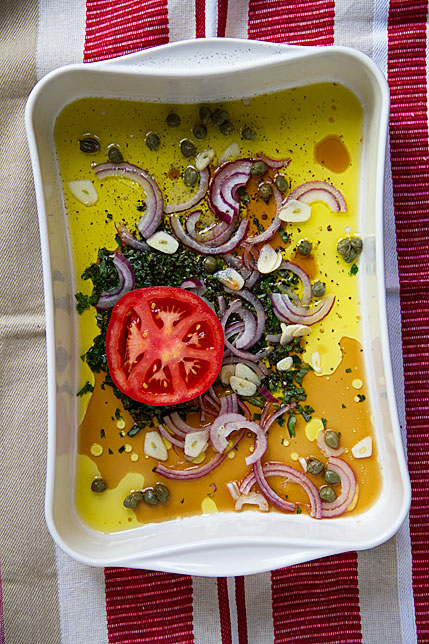 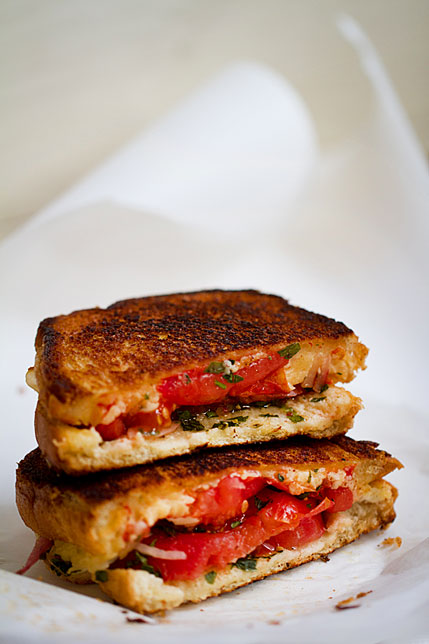 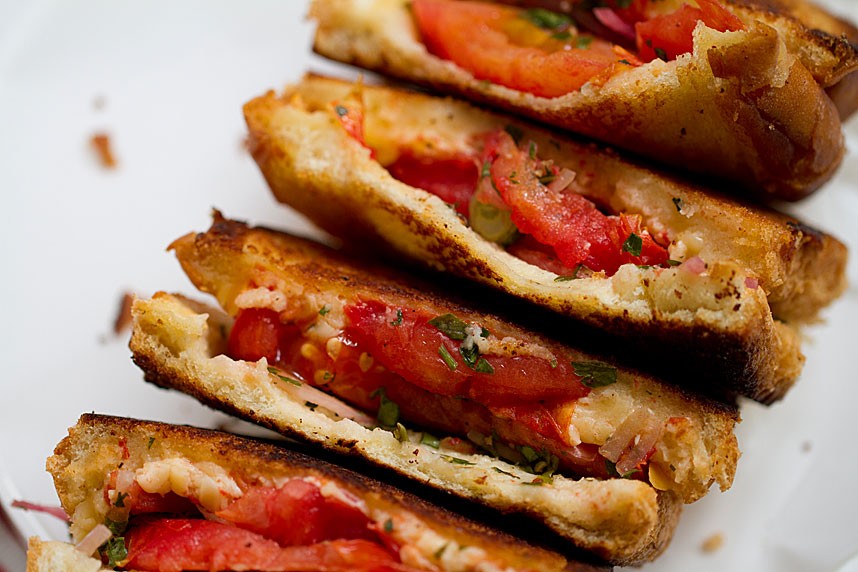 Do not crowd the pan when toasting. Work in batches if necessary and use more butter as needed. 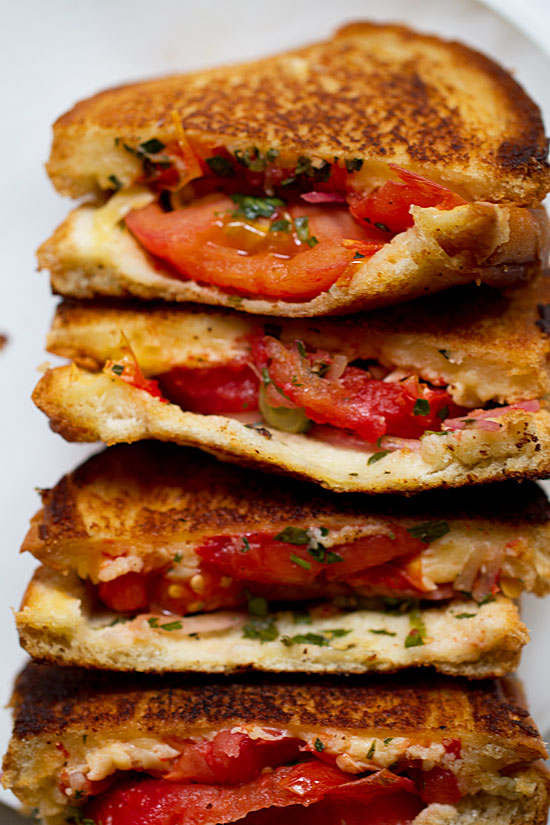 Make the marinated tomatoes: In a bowl, whisk together the oil, vinegar, parsley, thyme, pepper flakes, salt and several grinds of black pepper. Stir in the onion, basil, capers and garlic. Spread a little of the marinade on the bottom of a large baking dish. Top with a layer of tomatoes. Spread over a little more marinade, then another layer of tomatoes. Top with the remaining marinade, cover and refrigerate at least 3 hours before serving. The marinated tomatoes will keep up to 2 days.

Make the sandwiches: Place four slices of bread on a cutting board. Divide half the cheese slices evenly between the four slices, then top each with the 2 or 3 marinated tomatoes (with some herbs etc clinging). Top the tomatoes with the remaining cheese slices, then cover with the remaining slices of bread to form four sandwiches. Heat a large cast-iron skillet or heavy-bottomed sauté pan over medium heat. Add 2 tablespoons butter and swirl in the pan until it is melted and starting to bubble. Place the sandwiches in the pan and grill until the bread is a rich golden brown and the cheese has started to melt. Carefully flip the sandwiches over, add the remaining butter and continue to grill until the other side is browned and toasted. Slice the sandwiches in half and serve immediately. 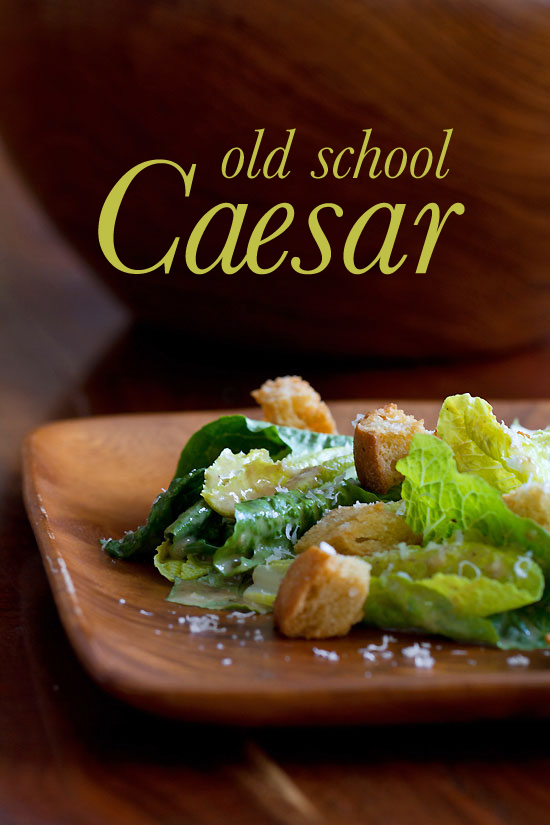